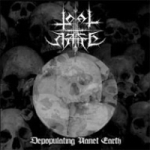 I often find myself trying to describe the cover of some Black Metal album to a friend and finding I lack the ability to distinguish it: “You know, the one with the black and white cover” or “that one with the guy in the forest wearing corpsepaint” or “the one with the nature scene on the front… you know, mountains and wolves.” How can one possibly distinguish between such impossibly generic visual themes? Then I realized that describing the music on these albums was as difficult or worse. “Uh, you know, it sounds like DARKTHRONE.” Yes, every time I am confronted with this dilemma I find myself hoping that the well of raw Darkclone Black Metal will soon run dry and we can finally move on with our lives. Sadly, there seems to be no end in sight. That being said, TOTAL HATE’s first full length album, “Depopulating Planet Earth” released by Agonia, like much of the raw Black Metal released these days, is not necessarily bad, just generic. It’s hard to discern a tangible quality about this album that would make it distinguishable from the countless recordings like this that are churned out every month. The production on this album is somewhat peculiar, though. The drums are mixed loudly and sometimes threaten to overshadow the guitar. This is true of the playing as well. The guitarist seems, at times, to be struggling to keep up with the drummer. Nonetheless, TOTAL HATE attempt on this album to capture the true, hateful essence of Black Metal. After a few listens, however, I can’t really confirm or deny the band’s misanthropic tendencies, and with the genre becoming so ubiquitous recently (having shown up in TV commercials, video games, etc.), it’s just difficult to take this seriously. I understand that there are those for whom this subgenre of Metal is of paramount importance, and perhaps those individuals will find more merit in this recording than me. For the rest of us who simply don’t have time to work our way through the avalanche of raw Black Metal releases, I think this album can safely be avoided. For more info check out: www.myspace.com/totalhate666