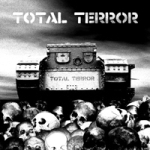 Its a remarkable feat for any old band to sound even the slightest bit as spirited as their young counterparts. In TOTAL TERROR’s case, time has been kind. Originally formed in 1993 as a side project of Dan Swano’s, TOTAL TERROR folded after one demo, probably because Swano was busy with EDGE OF SANITY at the time. In any case, time has brought him full circle to the DISCHARGE-influenced fury of TOTAL TERROR. Very much like the Norwegians in SKITSYSTEM, the Swedes in TOTAL TERROR play what Nicke Andersson would term “real” Death Metal. It borders on D-beat Punk, which, as you all should know, is where Swedish Death Metal borrows a lot of its drum patterns. Of course there is a litlte more at work here than simply D-beats. There’s the occaisional MOTÖRHEAD riff, and the incredible speed of MASTER. My only gripe is the piss poor cover artwork. It just doesn’t do the band justice. www.myspace.com/totalterrorsweden