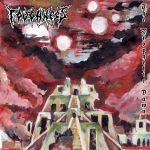 Formed in 2020, this Polish four piece presents in this, their debut album, a heavy and crushing Death Metal opus, which is influenced by the likes of DEMILICH, IMMOLATION and DEATH with a few GORGUTS and AUTOPSY touches. Yes, that means that their form of brutal Death Metal is complex, twisted and follows no rules. A special mention to the great use of the bass guitar as it seems it sets the tone for the music and it is used to actually add a lot more to it than just the lower tones. It is in fact a very impressive performance in there. And the guitars, although sounding at times dissonant, in complex tempos, they actually work for the music. There are also complex drums patterns, that makes everything more intense. I can tell you this is not an easy one to follow at first, but also has a charm that gets the casual listener. Probably the point, which sounds more normal for a Death Metal band, are the vocals. Cavernous low growling that have little variety. They do sound good anyway, but I’m sure that more deadly tones could be used to enchance this excruciating experience more. The production values are just the right ones, avoiding to sound compressed or too mechanical, they have this organic feeling, and at the same time have this muddy sound which gives the right amount of rawness. Although the name of the band makes no sense at all, the music does. Some might feel that this is more like a collection of riffs rather than regular songs, but believe me, it works very well as a whole. Not that many bands can play or perform this kind of complex and brutal Death Metal with such an ease. With each listen, new things arise. A great discovery. www.facebook.com/toughnessofficialpl, www.facebook.com/godzovwar