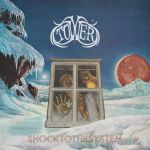 New York, New York… yes you were singing it too! Ok, so after this nostalgia line is over and you’re in the Metalhead mode, let me tell you of these four guys and lady and the magic of music that, once you close your eyes, will transport you to a different time… like a Marvel multiverse… with or without spiders. Once the speakers are on, TOWER will definitely transport you (if you are well over 40) to those years of MTV and watching Heavy Metal videos late, really late at night. There are so many things done right in here for us old schoolers that it is scary. The production is very vibrant, organic and yet at the same time simple and direct. Then the songs, the riffs, yes they are based in basic Hardrock and Metal sounds, but with a doomed sound that gives the band that halo of gloom. And then the great vocals that one ends up forgetting it is a gifted female singing. Sometimes bands like MERCYFUL FATE and STONE FURY come to my mind but also nods to OZZY, RATT and even WHITESNAKE with touches of early METALLICA are there. Yes sir, this is a trip to nostalgia, with an excellent performance on all fronts, and those vocals, you gota love those vocals courtesy of Sarabeth, who just kills. She is like the female version of DIO, just like the vocalist of that brothers band that is now famous on the web, precisely doing a killer DIO cover. Ok, I’m drifting away here, all in the name of rocking the hardest you can. If there is a word that defines the band it’s energy! A metallic energy that makes them do great songs like ‘Hired Gun’, which will be in your mind for ages. Bands like TOWER and UNTO OTHERS are bringing that late 70s / early 80s vibe with an actual sound and a lot of emotion that one cannot pass this by. A great album, contender for album of the year in my eyes. www.facebook.com/towernyc, www.facebook.com/cruzdelsurmusic