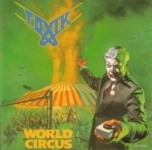 On their one and only "Wasteland" demo from 1986 New York’s TOXIK still sounded pretty much like a typical (yet already very promising) US Metal act, with crystal clear vocals and a more or less traditional Power Metal style. But it was definitely a big step forward for them when they parted ways with original bass player Lee Erwin and drummer Sal Dadabo and replaced them with Brian Bonini and PRIME EVIL’s Ted Leger respectively. I mean, you can probably imagine very easily that a bass player with a Jazz background and a drummer whose roots were in extreme Thrash Metal obviously had to have a massive influence in the evolution of the band’s material… So, when "World Circus" originally got released back in 1987 it represented a band that on one hand had speeded things up a whole lot, while on the other the bass lines had become a lot more upfront and complex. All of a sudden TOXIK stood for technical, energetic Speed Metal with a siren like lead vocalist and a whole lot of uniqueness. Twenty years later this album gets re-issued now with a lot of extra stuff. But even though the sticker on the sleeve tells you something about twelve bonus tracks, there’s actually only eight "real" songs to be found, next to the regular album material: three unreleased live / soundboard recordings (‘Straight Razor’, ‘Finer Points To Tragedy’ and the KISS cover ‘Parasite’), the entire 1986 "Wasteland" demo, as well as the song ‘Wasteland’ itself, from the "Metal Massacre IX" compilation. The remaining bonus material comprises of ‘Skippy Windshield’, an only five seconds lasting kinda fun thing from the "Wasteland" demo, while the last three cuts on the disc are short radio interviews (the last one together with King Diamond). The booklet has liner notes from all four members that recorded the "World Circus" album (Ted Leger – drums, Josh Christian – guitars, Mike Sanders – vocals and Brian Bonini – bass), plus all of the lyrics (except for ‘Heart Attack’) and the usual credits and thanks lists. Two years later (1989) TOXIK not only returned with their second album "Think This", they once again had undergone drastic changes, musically as well as personally. Original vocalist Mike Sanders had been replaced by Charles Sabin and John Donnelly came in as a second guitar player. Ever since "World Circus" the songwriting had evolved into a very complex, progressive direction, so that the band was actually a lot closer to WATCH TOWER, HADES and the likes now, with the biggest difference in TOXIK’s obvious more mainstream approach, best reflected in the new vocals. Charles Sabin sounded a lot more professional, yet not as unique as Mike Sanders, but fitted TOXIK’s new direction just perfectly! He was more of a Geoff Tate type singer, easily cabable of delivering strong melody lines to the technical extravaganca of his backing band. The album featured eleven tracks, including the LED ZEPPELIN cover ‘Out On The Tiles’ (which always sounded a bit out of place to me) and the great ballad ‘There Stood The Fence’ as well as the short outro ‘Think That’. Just like the CD re-issue of "World Circus" also this one has all the lyrics, the original thanx lists, as well as liner notes by Brian, Josh and Ted. As bonus tracks you get a live version of ‘Spontaneous’ as well as an instrumental demo with ‘Shotgun Logic’ and the three previously unreleased songs ‘Untitled Jam’, ‘Minor’ and ‘Lost World’. Due to the fact that both albums have stood the test of time very easily and the original CD versions have become very difficult to find, these re-issues are more than welcome now. You can order your copies directly at www.displeasedrecords.com