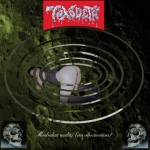 TOXODEATH was probably the first extreme Metal band I ever listened to from Mexico, thanks to their Wild Rags debut album “Mysteries About Life And Death” back in 1990. Why they never got bigger than this is beyond me, I guess there is some kind of curse on the Mexican scene that great bands like this one, CENOTAPH, BURIED DREAMS and DIES IRAE have managed to release mammoth albums but went nowhere after that. ‘Morbidest Reality’ is basically a reissue of TOXODEATH’s second album "Lo Mas Morbido De La Realidad", originally released in 1993 (which in fact is even harder to find than their older debut) plus 13 bonus tracks of unreleased material and demos, along with a 16 pages booklet including tons of stuff never featured before. Maybe it is the right time to re-release this album due to the back to basic Death Metal comeback of these days (but a crying shame that the re-release comes with such an unprofessional, almost bootleg like layout! – Frank). One of the highlight features of TOXODETH is the talent of leader guitarist Raul Guzman who sometimes displays an almost virtuosity performance on each song, keeping in mind that this was made in 1993. It is a shame that even with this album (originally distributed by BMG) the band never got the attention they really deserved, and more than that, it never helped the band to increase their status in the international Metal community. I guess it’s never too late! www.facebook.com/toxodeth1984, www.facebook.com/pages/american-line-prods/132289543506339