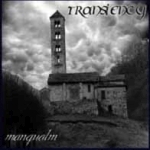 Beginning an album with a piece of piano music is by no means unheard of in Metal, but it certainly is uncommon. AMORPHIS had a beautiful introductory song on "Tales From The Thousand Lakes", along with many others. Transiency begin this, their first album, with a hypnotic and intriguing piano composition, followed by a standardly melodic guitar riff and from there, a pleasantly surprising FATES WARNING / IRON MAIDEN like gallop into epic territory. Pleasing though that is, it would be silly to award Transiency points for originality for that. They aren’t the first band to employ gallops and they certainly won’t be the last. Still, any album will be at least somewhat entertaining with them. This is pretty much how the album plays itself out, and to continue an earlier comparison, "Manqualm" is an awful lot like "Tales From The Thousand Lakes", except not nearly as good. All the melodies are there, all the slow, doom laden parts are there, and its great. But think, where have you heard this before? www.myspace.com/gentleexhumingrecords