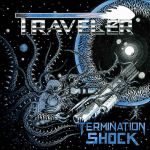 “Termination Shock” is TRAVELER’s second album. First off, I was expecting some great quality Metal, since the band hails from Canada. And this country has had a long running history of great bands, no matter if it is Death or Thrash or Progressive or any other kind of Metal. And luckily I was not disappointed at all. TRAVELER plays some good old Heavy / Speed Metal, heavily influenced by NWOBHM bands like JUDAS PRIEST and IRON MAIDEN and Speed Metal classics such as early early HELLOWEEN, RIOT and fellow countrymen RAZOR. I mean, with influences like that, one can only expect excellent and catchy riffs, soaring vocals, tasty leads and a pounding rhythm section. And that is exactly what “Termination Shock” is all about. Jean-Pierre’s vocals are incredibly solid. His style is classic, yet modern and his constant tone variations, anywhere from low to high, are great. Sometimes his vocals can go anywhere from MANOWAR to MERCYFUL FATE and back. And every time he’s right on the spot, perfectly in tune and adding a lot of feeling to every song. As said above, bassist Dave and drummer Chad’s foundation is tight and detailed. From the drum fills to the bass melodies and harmonies, both showcase an amazing understanding of their style of music. On top of this, we have guitarists Matt and Toryin, mercilessly throwing tons of really good riffs at you. I mean, it’s been some time since I’ve heard a pair of guitar players that think so alike riff-wise, yet so different when it comes down to leads. And then those classic duos come to mind, like Murray and Smith or Hansen and Weikath. The production is stellar, as it should be. It is so organic it threw me back to the mid-late 80s, yet it has that modern and crisp edge. Specially I like the snare and the bass sound. The mix is massive, yet it has enough dynamics to keep everything interesting and fresh. “Termination Shock” is one of those albums that needs to be heard to be believed. It is rooted firmly in classic Heavy / Speed Metal but at the same time, refreshing, despite being brutal at times, like in my fave track ‘Deepsace’. Oh, did I mention that their lyrics deal with space and space travel? That only adds more to it. If you call yourself a Heavy Metal maniac, then “Termination Shock” is mandatory! Go show the band a well deserved support at www.facebook.com/travelerheavymetal and get their album from their label www.gatesofhellrecords.com