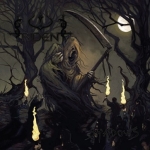 I’ve never given up hope that former "Storm Of The Light’s Bane" members could write something similarly monstrous. Rhythm guitarist Johan Norman went on to play in SOULREAPER, a disappointingly bland MORBID ANGEL / DISSECTION hybrid. Norman’s next project was TRIDENT, which released a DISSECTION – style record called "World Destruction" in 2010. Although the style was there, the songs didn’t encourage more than a first listen. Well, here we are in 2015 and it appears that Norman’s 3rd strike is a charm, as TRIDENT’s new EP is showing some promise. Musically, this is blast-infested Swedish Black Metal, not unlike a more embellished MARDUK (although miles better than the very vanilla "Frontschwein"). The one track that really stands above the others is the slower ‘Shadows’, a windswept and melancholic anthem. Lovers of classic freezing Swedish melody will bite their fuckin’ nails in glee at the Black / Death majesty of this driving hymn. If TRIDENT can give us full length # 2 with 8 – 10 tracks even half as good as ‘Shadows’, than maybe we can finally get an album approaching DISSECTION’s greatness. Find more at: www.facebook.com/pages/trident/273317446089846, www.war-anthem.de