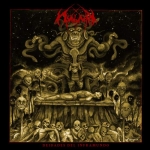 Dunkelheit Produktionen is a pretty active underground label from Germany, whose aim is to release pseudo-cult, new or unknown bands from all over the world (mainly from Asia and South America). I must admit that I haven’t been positively impressed by Dunkelheit’s releases so far, especially when it comes to Lo-Fi and bizarre experimentations or noisy Black Metal stuff. But this time it’s different because the German label offers us a decent and sufficiently interesting old school Death / Doom Metal band from Perú. TUNJUM is a young trio from Lima and “Deidades Del Inframundo” is their first full length album, recorded in 2017 and released in July 2018. Their discography includes also three demo tapes, a split EP and a single EP. The band’s name origins and the concept are inspired by the ancient Muchick culture, although the lyrics are written in modern Spanish: a poor choice to me, because if the lyrics were written in this extinct Chimuan language, probably they would have made the album more effective and fancier. The artwork depicts a human sacrifice ritual at an ancient Moche temple: piles of bones, corpses, severed heads, a naked woman laying on an altar and a priest offering his victim to a snake handling supernatural being. In terms of visual and concept imagery TUNJUM have a lot in common with the Mexican Black Metal legends XIBALBA ITZAES and with the Black Twilight Circle from Southern California. And now let’s talk about the music: here we have almost 42 minutes for eight songs of old school minimalist Death Metal filled with doomy parts. Since they’re Peruvian, I would have expected something more in the vein of the Death Metal cult names from that land, but unfortunately TUNJUM can’t boast neither the bestial brutality of HADEZ and GOAT SEMEN nor the musicianship of MORTEM and ANAL VOMIT. This Lima based trio sounds more like a simple mixture of INCANTATION and AUTOPSY; something pretty trendy nowadays, right? Yes, very trendy, but TUNJUM don’t have enough musical quality to be compared to the big names cited above or to the best new bands of this genre like ANATOMIA, DISMA etc. The weaker point of “Deidades Del Inframundo” is the total lack of dynamism and variations in the musical composition. The song structures are very simple with two or three riffs for each track, repeated over and over again. When they speed up, we have the typical tremolo riffing à la INCANTATION and a very repetitive drumming, not particularly fast and ultra static (VON worshipping?). The slow parts, by contrast, are a bit more dynamic with some rollings and double bass patterns, as well as some obscure and claustrophobic melodies. So, are TUNJUM more inspired when they slow down? Yes, but not so much, also because the vocals don’t help a lot to break the monotony. The singer, who is also the drummer and the only female member of the band, has an incredible voice for a woman: ultra guttural and cavernous, very reminescent of Craig Pillard. TUNJUM, in the final analysis, succeeds partly to turn what may seem pointless and repetitive into a hypnotic form of primitive and ancestral Death Metal. A minimalist approach that is able to create a morbid and evil feel; something similar to what I have already tested listening to the works of another Peruvian band, but in the Black Metal territory: BLACK ANGEL. Let me be clear, TUNJUM don’t invent anything and, yes, we have listened to these kinds of riffs and tempos a thousand times (DISCIPLES OF MOCKERY, DERKETA, MYTHIC, GOATLORD and CIANIDE, just to name a few). However, having said that, they’re worth a listen. For more info: www.dunkelheit-produktionen.de