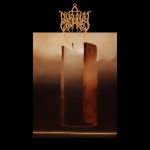 TURRIS EBURNEA is formed by members of KRALLICE and COSMIC PUTREFACTION. I think that’s a great intro to a band without even describing the sound of the band. An international project focusing on the depths of atonal dissonance and some refreshing technicality. Nothing is per definition here, there isn’t your regular rhythmic line to follow through. It is a build up as the band goes along. Right from their first track ‘Unified Fields’, TURRIS EBURNEA simply meander around traditional ideas and stretch their imagination of what is possible. Clearly for fans of dissonant GORGUTS, STARGAZER and the recent technical Death Metal bands moulding atmosphere to unrecognisable layers of sonic attack. We seldom are able to separate these layers in such an experimental output however, what truly is remarkable is the bass on this album. It is extremely unorthodox and is quite interesting. The sound isn’t necessarily riff focussed, it is a complete collision of utter chaos with stellar musicianship. Riffs simply flow through, the drumming is literally adding in another dimension to the overall sound. The vocals are a perfect vehicle for the ideas of the band. This is easily one of the best experimental Death Metal albums I’ve heard in some time. It is amazing how well they add in gentle melodies to pieces in between particularly as seen on ‘Syncretism Incarnate’ where the band slowly builds to an intricate melody and eventually shifts their entire focus to it and finally ending the song with it. TURRIS EBURNEA have clearly put themselves out on the map this year with their stellar self-titled release which not only challenges the listener but is truly a distinct step into what lays next from the perspective of the genre. For TURRIS EBURNEA rhythm is not a study of numbers and songwriting is an open book with no rules. I’m genuinely excited to hear what they write next. Give this release some time and do get a copy! For more information please visit: www.facebook.com/turris-eburnea-105459167894064, www.facebook.com/everlastingspew