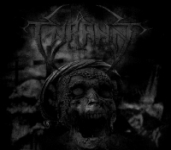 An ultimate punishment is near, are you ready for it? From Oslo, Norway, comes this furious Black / Thrash act called TYRANN that seems to be on steroids, and full of blind rage and pure hate. TYRANN consists of 3 experienced fellows that all have lots of experience from some other grim and black forces of the Norwegian Metal scene (TSJUDER, 1349, PANTHEON and so on) – and it shows on this side project of theirs that was resurrected in this unholy year 2006 again (06.06.06, an international SLAYER day, remember?). The basis of TYRANN’s blindly raging metallic invasion has been built on a fertile ground of Thrash Metal, but that ground has also got a few strong handfuls of blackened seeds from these guys, and the result sounds pretty damn good and overall enjoyable. “Shadows Of Leng”, which is the first fruit that this threesome has created together, is not only about a merciless beating and sort of speed-for-speed’s sake type of attack, but also about some well built-up melodic parts and strong atmospheres that they have been capable of creating around their songs successfully. I really like the album’s closer tune, ‘Grave Dreamer’, which lasts over 11-minutes – and should even make the guys of IMMORTAL envy them, at least a little bit. Talk about some really grim and eerie atmospheres in this particular song in question – it sounds truly impressive, I can tell! For speed freaks and lovers of more storming waters musically, there’s many directions to look at on the album, as the outcome of the songs on “Shadows Of Leng” is based on all those ingredients that can be used as descriptive adjectives when someone has reached a state of becoming mentally deranged and being completely outside a stable mindset – raging like a mad bull at a prehistoric museum and simply grinding everything to a fine dust on its way. This is all good stuff for the fans of aggressive and atmospheric blackened Thrash. Especially recommended for the extreme Metal community that also want to hear some strongly made atmospheres in their daily doses of metal. “Shadows Of Leng” offers plenty of all these tidbits. For more info check out: www.tyrannlegion.com, www.myspace.com/tyrannlegion, www.karismarecords.no