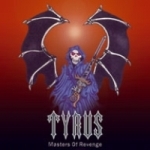 I hate to come across arrogant sounding, but I always thought that I managed to get my hands on mostly all obscure, yet essential 80s Power Metal releases back in those days. But obviously I was wrong as I missed out this little gem, that just got re-issued via Iron Glory Records (how the heck did they find out about this killer outfit these days???). TYRUS was an incredibly promising five piece that came up with this eleven song offering, entitled "Masters Of Revenge" only six months after the origin of the band, back in 1983! Musically they should easily appeal to every underground loving Power Metal maniac, who still worships similar rooted American acts of the 80s such as HEATHENS RAGE, TYRANTS REIGN, STORMTROOPER, HAVE MERCY, GARGOYLE etc. Even though TYRUS aren’t exactly sounding like those just mentioned bands, there’s a similar atmosphere surrounding them. Musically this album is a lot closer to early HELSTAR (just a little rawer, and less complex) meets old LIEGE LORD, which means a first class powerful METAL vocalist in combination with vintage MAIDEN influenced music. The production by Eric Greif (later to be found within the Death Metal scene) is extremely poor, yet very authentic sounding, while the musicianship is partly a little sloppy, but always full of the right attitude and feeling. In comparison with most of the so-called top acts of today this is still a lot more unique sounding. So, in case you didn’t start listening to Metal after HAMMERFALL released "Glory To The Brave", this could be another "must have" item for the die hards out there! Great one!!! Contact: Iron Glory Records, Postfach 662, 71606 Ludwigsburg, Germany, website: www.ironglory.de e-mail: info@ironglory.de.