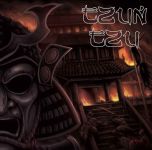 I remember well when I read the particular name of TZUN TZU, a Death Metal band from Adelaide, Australia. It was 2006 or so, the cover artwork of the EP "Wihout Zen", a representation of a Japanese holy man, differentiated itself in the distributions from the splatter / gore oriented ones, so hyped at the time. The music was dark and brutal, influenced by MORBID ANGEL, NILE, IMMOLATION, DEICIDE and the likes, with the use of samples based on Japanese folk. The lyrical concept inspired by ‘The Art of War’ and its culture was a distinctive trait, whereas the production was to improve. The second EP "Kunoichi" was released two years later, a better work than the debut. Shortly after, the splits with the fellow countrymen ALTARS and IGNIVOMOUS were released, and their fame increased in the underground, especially thanks to Nuclear War Now! Productions. Then, the line-up got a change, the drummer Selenium replaced Dan Wild and joined Don Taylor (guitars and vocals), Nick Seja (vocals and guitars) and Adam Ritchie (bass and programming). The improvement, in terms of speed and technique, arrived with the self-titled full-length, released in the fall of 2012. The songwriting is confirmed as good as they did in the first works, the general mood is suffocating and bleeding, the vocals are extremely low and vast and the riffing is square, gloomy and strict to the absence of catchy ideas. Short tracks as ‘Zazen’ and ‘Shi’ are counterbalanced by the long ‘Phases Of The Godai Philosophy’, over nine minutes with fast and slow parts together. ‘Hara Kiri’ is a perfect epic end of the album, while ‘Blood Of The Fallen’, ‘The Assassin’ and ‘Without Zen’ are re-recorded songs from the first demo and the split with IGNIVOMOUS, but they’re perfectly integrated with the rest of the album. ‘Tzun Tzu’ is the summation of the period since they started to five years ago, so if you’re into Death Metal and Japanese culture, I totally recommend you to check them out at www.facebook.com/tzuntzu, www.facebook.com/pages/dissident-records/356981737980.