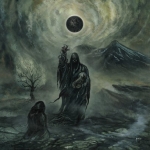 Portland’s UADA is back with their follow up to 2016’s impressive “Devoid Of Light” album. The band is the brainchild of former CEREMONIAL CASTING’s Jake Superchi and with a current line-up that consists of members from SJUKDOM. From my personal experience the Pacific Northwest of the USA is a hotbed for up and coming new generation of bands with UADA being on the forefront. The band really came out full force, quickly establishing a following for their brand of melodic Black Metal and has toured with several well-known acts (as well as the band making national headlines for signing autographs for a Presidential Cabinet member from Mexico). The band itself is in the same vain as MGLA along with some aspects of DISSECTION, and a part of VINTERLAND. “Cult Of A Dying Sun” picks up where “Devoid Of Light” left off with crushing guitars, atmospheric melodies, and well thought out song structures. The production on this record is top notch where you can clearly hear all instruments and the vocals are not drowning out the rest of the music. ‘The Purging Fire’ gets things going and showcases the band’s progression since their debut. A great track with several tempo changes that really mesh well and deliver on the goods. ‘Snakes & Vultures’ follows up with intensity as well as a very good melodic sound but there were some parts of the song where it dragged a bit and felt like it was missing something to get it over a bit more. The title track was one that really caught my attention especially the drumming on this song with some perfectly placed set of fills. I’m a sucker for a good instrumental which leads us to ‘The Wanderer’. It does the album justice with a relaxing acoustic guitar passage accented with hand drums and guitar solos that really personify the track. ‘Blood Sand Ash’ was decent but really didn’t do much for me. ‘Sphere’ was another track that impressed me with a guitar hook that grasps the listener about half way through the song and a piano passage towards the tail end of the song. ‘Mirrors’ has a run time of 10:28 minutes which drags and feels like it is mostly filler. UADA has provided an intriguing follow-up to their debut with “Cult Of A Dying Sun” and have so far provided a solid discography. The song compositions are intriguing, complex but catchy, and as previously mentioned, are well thought out. Overall really good musicianship that really bring the spotlight to the band. If you were / are a fan of CEREMONIAL CASTINGS then UADA will not disappoint, especially the seven tracks on this record. I’m looking forward to what these guys bring to the table in the future. For more info: www.facebook.com/officialuada, www.eisenton.de