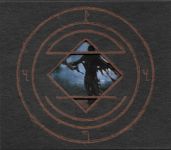 UADA finally return with album number three. The two predecessors were received pretty well in the underground and extensive touring granted the band the attention they deserve. Their debut really was on heavy rotation for a year in my player. Same goes for the second album, even though it was a reproduction of their debut, but still above average. Anyway I was concerned that they would start repeating themselves like MGLA. The opening and title track ‘Djinn’ shows that they finally found their sound and developed it to the next level. All trademarks get combined with a matured songwriting and fantastic production. The diversified vocals are perfectly balanced and the guitars create a unique atmosphere. When you think the song ends it starts with its second half, which is a damn good mixture between classic Rock and Black Metal. And the vocals create goose bumps while the melody drills its way into the head. What a fantastic opener. ‘The Great Mirage’ continues in the same direction and the melody immediately makes clear that UADA finally created their own unique sound. Again the vocals vary between caws, screams and whispers. And once again the brilliant lead and melody guitars carry the listener through this outstanding track. ‘No Place Here’ keeps the bar high and increases the speed without renouncing the melodies. ‘In The Absence Of Matter’ offers some 90s IN FLAMES vibes while the vocals change into effected chorals varying the caws again, but the main theme is very melodic and the old Gothenburg school gets quoted. Again they manage to create a very memorable lead melody. ‘Forestless’ convinces with the breaks and another good melody line. The last track ‘Between Two Worlds’ is more classic Death Metal orientated and starts slowly before the tempo gets increased in favor of another melodic track, which gets harder the longer it lasts and also the incorporated grunts and heavy deep guitars are pretty cool and old school Death Metal orientated. And the classic Heavy Metal tunes in the end really show the talent of the band. Rounded off by a fantastic cover artwork, this album is the best work in the melodic Black Metal genre for this year and even though MÖRK GRYNING will unleash their new album and also the current NECROPHOBIC album is very good, UADA is simply leading this genre and this album sets the bar very high for all bands playing this style. Definitely a must have for all lunatics. More info can be found here: www.facebook.com/officialuada, www.eisenton.de