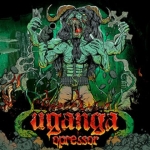 Featuring Manu Joker (ex – SARCOFAGO) on vocals, UGANGA is a Brazilian band formed in 1993. They released 3 demo tapes and it was not until 2003 that they put out their first album. Then came two more full lengths in 2006 and 2010. "Opressor" is their latest output, featuring 13 songs of heavy, fast and furious Crossover / Thrash Metal. It definitively draws more Metal than Punk / Hardcore influences. Imagine some early SUICIDAL TENDENCIES and NUCLEAR ASSAULT mixed with old school Brazilian Punk and you have UGANGA. These guys take no prisoners on this album, spitting out 13 songs of groovy and heavy music. They even have some surprising melodic lines here and there. The production is clear and punchy, maybe a bit too modern for my taste. The mix is well balanced and the master has nice dynamics. The overall sound is really heavy, so sometimes you think you are not listening to a Crossover band, but a full on Thrash Metal band. They also included a cover version of VULCANO’s ‘Who Are The True’. A nice touch, since the song actually fits UGANGA’s style perfectly. "Opressor" is a solid album. The only thing here is that the album is a roller coaster. Some of the songs hit you in the face right away and others kinda bring you down. I mean, there is nothing wrong with variation. It is just a matter of personal taste, since I like my Thrash / Crossover to be a non stop beating of the senses. Absolutely recommended for the Crossover / Thrash / Punk freaks out there. The band can be contacted here: www.facebook.com/ugangaband. Get the album from their European label here: www.defensemerch.com