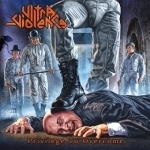 I can’t help but I really can’t get enough of that kind of music! I need my daily dose of Thrash Metal and that since almost three decades. And it even makes a lot more fun when your favourite music is done by a competent outfit as in our case here. This Italian four-piece had already a good start with their solid debut EP "Wildcrash" one year ago and they head into battle now with the first full length album entiltled "Privilege To Overcome". It seems the title is program as these South European Thrashers are able to top their indeed not weak predecessor with ease. The squad stuck to its recipe of delivering a lethal assault of Bay Area influenced Thrash and garnish it with some chunks of Euro style steel. Rapid fast, razorblade sharp riffing without mercy and powerful, dynamic drum work are the basic ingredients of the thirteen tracks featured on the disc. The material is intense and tight as Hell but all is arranged more mature compared to their older works. Though the band keeps the pace quite high on most of the songs they don’t forget to vary the speed. Various cool breakdowns, tempo and rhythm changes keep the whole thing flowing and make it even more interesting – not to speak of the excellent and wild leads. The album kicks off with the fast and intense opener ‘Spell Of The Moon’ with great guitar work and a catchy chorus. ‘L.F.D.Y’ keeps up the pace and delivers another deadly slap of old school Thrash. The album is peppered with excellent tunes and is able to keep the quality bar high like the raging ‘10.000 Ways To Spread My Hate’ proves. But the band also throws in some surprises e.g. the short smasher ‘You’re Dead!’ or the Doom laden ‘The Voodoo Cross’. The only complaint I have on "Privilege To Overcome" is the length of the album as I think almost one hour is a little bit too much for a Thrash album. So fourty minutes would be a proper duration for the next one. But that’s lamentation on the highest level. ULTRA-VIOLENCE released a really convincing long player (incl. an excellent Ed Repka cover artwork) which should not disppoint all real Thrashers out there. Without any doubts the band has great potential and in case they continue to forge such furious metallic tunes the future for these guys from Turin will be bright. Great!! www.facebook.com/ultraviolencemetal