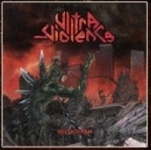 If a name like ULTRA-VIOLENCE drops you can’t help recalling that classic Thrash Metal album released by a bunch of Bay Area Thrashers of Filipino descent which are better known to most of you as DEATH ANGEL. Anyway, our Turin based maniacs here caused quite a big stir in their local / native underground and got immediately signed by Punishment 18 Records which do a great job in supporting talented Italian hordes. Of course this young Thrash outfit, which was formed in 2009, might not have the quality of above mentioned US legends but nevertheless they were able to ban five solid and well executed chunks of pure 80s inspired old school Thrash Metal on this little silver disc. They put a lot of sweat and passion into the music which is a cool blend of European styled Thrash (with a huge Teutonic vibe) and razorsharp Bay Area riffing. Sounds quite fresh if you ask me. The tunes have a lethal dose of Speed with some nice tempo / rhythm changes ‘n’ breaks while the riffs itself have enough bite and crisp to drag the listeners attention. There’s no doubt about it that these guys know how to handle their instruments (e.g. excellent bass lines) even they might not be accomplished in every department. The sound quality of "Wildcrash" is quite convincing for a debut and has enough punch which makes this EP an entertaining ride through its little bit more than 20 minutes. So if you are a fistbanging maniac who enjoys checking out new talented bands then give this four piece a chance. Do yourself a favour and add "Wildcrash" to your collection by either getting in touch with this Italo headbangers at www.facebook.com/ultraviolencemetal. Recommended tracks: ‘Wildcrash’ or ‘Frustration Of Soul’.