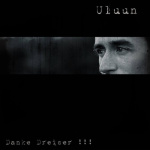 One has to admit that every French Black Metal band that once stood out had a certain queer element to its music, which was also what made this scene so unique. So here’s French band ULUUN presenting its debut album “Danke Dreiser!” in its disrupting atmospheric Black Metal form. An oppressive ambience stretches along its nearly one hour of dense passages that vary from mid-paced rhythms to down-tempo ones that suddenly break in. ULUUN delivers a kind of music that drags a desolating mood within it, and it most often sounds like many of the bands from the 2000s that kept the Black Metal vibe of the 90s but with a better recording. The crude guitar sound seems to blend with Alrinack’s French sung narrations really well, and I do believe they managed to give it some personal touch in this sense. The tracks ‘L’Etincelle’ and ‘Désillusion’ particularly drag my attention for sustaining this atmosphere throughout its long lengths, being the latter the highlight of the album with its ethereal like guitar passages. This interlude temporarily interrupts the whole soundtrack of anger with a very well-thought and introspective bridge. It is a good but not an extraordinary album though, and the band errs on using their evident big scope of musical influences all at once, by shifting from certain simple but unsettling passages to more elaborate rhythms that break in too unexpectedly, which occasionally sounded as a downside since it takes one out of its original flow. The opening song is an example, by introducing a misplaced triplet riff in such an intense moment of the song, and with that giving the impression the band would have a rather modern approach that doesn´t come back later in the album. Apart from that, for a band that sticks to the heavy aspect of the term atmospheric in times of bands flocking to cleaner approaches, ULUUN seems to be a promising name that, once crafting the best in their musical potential, could eventually stand out as among the oddest names of France. For further information check out their Facebook page at www.facebook.com/pages/uluun/137721536245148 or go straight to the label’s website and get your copy at http://satanath.com/sodp