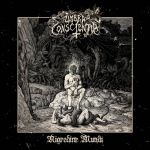 Let me start off on the right foot with some honesty: I had, for the longest time, no idea what to say about the first UMBRA CONSCIENTA record “Yellowing Of The Lunar Consciousness”. If it was a boring record, I’d call it and be proud of that pun, but I can’t in any honesty do that. It was pretty ok, nothing more. In 2019, the band with members from Costa Rica and Germany emerged from pretty much nowhere, impressing all Black Metal music nerds with their crawling, relentless but just ok debut. Remember dangerous Norwegian Black Metal? Remember when just listening to it felt like an act of rebellion? Those days seem like a long time ago; the original fury replaced by bands passively crowd-surfing on the reputation and mystique of old. Hm, everybody does that today. Well, this time UMBRA CONSCIENTIA is back to kick you in the balls, spit in your face, and remind you that God is dead and you should quit crying about it. It takes the stone-cold doomy fury and malevolence of its predecessor and beefs it up with better production and tighter song writing. Imagine the cavernous dissonance of bands like BLACK CURSE or FUNERAL MIST, the evil atmosphere of the latest CELTIC FROST album, and the vocals of a sewer creature smoking 50 a day. This time I can say it’s a great album. Well done folks. www.facebook.com/umbraconscientia, www.facebook.com/terraturpossessions