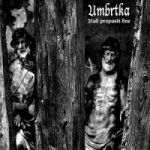 This Czech project band was formed in 2000 by members of the Black Metal act STINY PLAMENU and the doomsters QUERCUS and did only recordings available on the net so far. They label their style as “Gray Metal” as, according to the info, this “highly original Metal project” claims to be influenced by the likes of SATYRICON, THE KOVENANT and KING CRIMSON. Unfortunately this high aiming four piece fails to deliver something impressive and mind-grasping even though the musical abilities are there. Some parts remind me of classic Czech Black Metal but in its entirety the material sounds a bit undecided – there are too many incongrueties and elements which hinder the flow. Hmm, some melody lines remind me of older PARADISE LOST, third or fourth album… and now an accoustic guitar with a strange delay effect sets in… do I hear samples? There surely is potential to be found but it sometimes wanders off into nothingness. Lyrics are sung in Czech, by the way. So, if you refer to yourself as an open minded person and have a soft spot for experimentation and Czech vocals check their homepage which is now available in English also: www.umbrtka.com. The photogallery displaying the industrial surroundings of their hometown Plzen (Pilsen) is worth a click, I have to add. In case someone out there would like to give these guys a proper release contact them at: umbrtka@umbrtka.com.