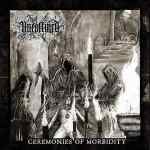 It was three years ago that the English quartet UNCOFFINED hit me from out of nowhere with their first album “Ritual Death And Funeral Rites”. The devastating Doom Death the band from Durham delivered on that album just killed me like a rotting stream of lava. Now they are back again after a long wait with a second album called “Ceremonies Of Morbidity”. Talking about morbidity, this word describes this album best. What I described as a “bastard child of CATHEDRAL and CELTIC FROST, bred by SAINT VITUS and nursed by WINTER” became a morbid child of Doom. From the first notes after the intro to ‘The Horrors Of Highgate’, the riffs creep out of the speakers, the drums are lurking viscously and the density of the sound is nearly inhuman. The monumental tension is kept until the last chords of ‘Awakened From Their Dormant Slumber’ are faded away. There are only few moments the listener might lay back for a few seconds due to the interspersed samples from horror movies, mainly used as intros. But that will be the only peace you might find in this struggle between the lava and the rottenness. To me, UNCOFFINED have kept the promise they made with the first album and are ready to claim the throne of Death and Doom. Check out www.facebook.com/pages/uncoffined/196192110415782 or www.memento-mori.es to verify my words!