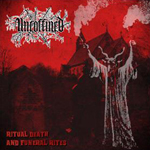 Sometimes, rotting evil comes along in unexpected ways. And sometimes, it even dooms you to death. UNCOFFINED from Durham, England are those unexpected guys. A four piece, consisting of members of THE OBSCENE and WINDS OF GENOCIDE, some of them also played in BLESSED REALM ages ago. Out of nothing, they are here with their first offering, a six track EP named "Ritual Death And Funeral Rites". And this offering knocked me out of my socks immediately after the introducing sample from an unknown zombie movie. Hell, what a rotting stream of lava creeps out of my speakers… The opening ‘Twisted Shape Of Creeping Terror’ bears its name with any right. Horror creeps slowly but sinister, like a lava stream garnished with malicious vocals. A song that also offers typical Doom breaks and some gloomy harmonies full of despair. Imagine UNCOFFINED as a bastard child of CATHEDRAL and CELTIC FROST, bred by SAINT VITUS and nursed by WINTER and you might get a little idea about the devastating heaviness they deliver. The second song ‘Night Of The Witch Childe’ has its strength and power in the feeling that reminds of the mighty WINTER, coming to us with Death and darkness. With the title track ‘Ritual Death And Funeral Rites’ pure Death and Doom makes the dead rise from the graves slowly to celebrate evil rituals and scare those weak-hearted to death. ‘Blasphemous Execration Of Holy Ground’ is pure creeping evil once more with a dose of the HELLHAMMER and a joyful SAINT VITUS dance. Finally it’s time to summon ‘The Devil And The Old Cursed Tree’ to bring the sacrifice of UNCOFFINED to the masses to an end. But wait! This is not the real end. There’s one final track, the only one I was anxious about from the very beginning. ‘Frustrations’ is a cover tune, a song originally recorded by REVELATION on their millennium epic "Never Comes Silence". Do these English men really dare to do such a cover? Yes, they did! And even though I still think that songs from this album can never ever be improved or barely adopted suitably, UNCOFFINED didn’t fail with this risk, for this cover fits to the other stuff on the record pretty well. This time, I don’t just advise you to check out this band, but I tell you to visit www.facebook.com/pages/uncoffined/196192110415782 or www.reverbnation.com/uncoffined for your own best.. Check the label at www.memento-mori.es