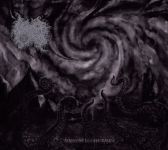 Finnish UNCREATIONIST’s debut album, “Whirlwind In The Ashes”, comes out after a ten year hiatus after their only previous material, 2012’s “Demo I”. It has been issued by the also Finnish label, Insurmountable Rex, their only album to date. And finally, the three members of the band wish to remain anonymous. This made the first listen a (very welcomed) mystery in itself. They play a combination of Black and Death Metal, often mixing slow, Doom-ish passages to add atmosphere. With only four tracks clocking at 40 minutes, the songs keep the listener interested and eventually, they seem to end too quickly. The arrangements are compelling, offering coherent and solid structures throughout each song. The usage of different moods and constant oscillation is what got me excited and impressed at the same time. Nowadays, a band that has a clear path such as the one displayed here is rare. So, the album keeps building up layer upon layer of details that comprise a characteristic style. Guitar wise, the eerie harmonies and haunting melodic themes clash with palm muted and tremolo riffs. The bass is a little buried in the mix, emerging when needed. Especially in the slow parts, where it takes a different approach, keeping the rhythm section tight and solid. The drums are organic and natural, with a precise performance and a nice use of fills and cymbals. The guitar tone first reminded me of (in my humble opinion, the now tiresome) modern NWOSDM template. But UNCREATIONIST has managed to use that tone and convert it into a hollow and abysmal sound reminiscent of early TIAMAT: slowed down melancholic melodies creating a lot of contrast with the proto-blast beat faster parts. Finally, the vocals tend to stay in a mid grunt that doesn’t go as low as Death Metal growls, nor as high as the typical Black Metal shrieks. Basically, UNCREATIONIST do blend both of their main influences perfectly, without leaning too much in either of these styles. UNCREATIONIST brings a convincing debut recording that makes them stray away from trends. Their music is interesting and offers a lot of ambience and variation. I am looking forward to their next release. I just hope it doesn’t take another ten years for them to come up with it. Show some support and follow the band here: https://uncreationist.bandcamp.com