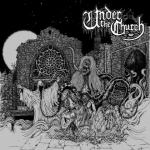 UNDER THE CHURCH
Under The Church
(Pulverised Records)
21:12min

When we just think that old school Swedish Death Metal has been overexposed once again, and too many non Swedish bands have jumped on the wagon and the mediocre releases have started to show, a release here and there confides my firm belief and adoration for the genre. UNDER THE CHURCH released their first demo last year, which I wrote a few words about, which you most likely already have read, so to spare all of you rabid followers of Death Metal for the bloody details, newbie head here, if you want to catch up on the unholy threesome that has spawned the band. After the demo was released and gained some attention, the great and Swedish adoring Singapore based label Pulverised Records signed the band, and the first abomination of that cooperation is this release, that consist of three new tunes and the three tunes from the demo, re-recorded for our pleasure and pain, if the volume is turned to max. The crustiness of the demo tracks are taken a bit further in the new compositions, aggressive and fierce Death Metal with a raw and in your face edge, yet catchy and with the feel of olden days. The catchy and grinding guitar riffs together with the pounding rhythm section and the raw growls, makes a punishing combo that sucks you into the vortex of UNDER THE CHURCH, a vortex that is hard to escape, as your neck throws your head back and forth in a headbanging frenzy. The re-recorded demo tracks do get some new life with the new and more compact and thick sound, I really dig the raw and garage like sound of the demo, though the Sunlight grinding guitarsound and impact the sound has now, do work well, and it does the job, a fist in the face of the non-believers, of this kind of music! UNDER THE CHURCH has now recorded and released 6 tracks within the last couple of years, all of music that excites me about how a full length from the guys will sound and impact me, the three demo tracks are instant classics, especially now when having listened to them in two versions, and I’m sure the three new tracks will grow as well, in time. With the members of this band involved, I didn’t had a doubt that it would turn out listenable, though this good I didn’t see come, please keep it up guys! All further info at: www.facebook.com/underthechurch, http://underthechurch.bandcamp.com, www.pulverised.net