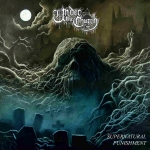 If it is not broken… never fix it! And a lot less if we are talking of juicy, crunchy riffs, total old skull Swedish Metal worship with punked out attitude all the evil way. And that, my fellow Metalheads, is what UNDER THE CHURCH is all about. Formed back in Sweden by former members of NIRVANA 2002 (a band I cannot recommend enough and was sad they did not achieve more back in the 90s) you cannot tell a master blacksmith how to craft a sword. Their songs spew out venom infused with an a cold frosty aura, like if the hammer of hell strikes in the back of those who do not follow the left hand path. The band is surely obsessed by cruelty as songs like ‘Supernatural Punishment’ call out. Those who survive this skull-crushing melodies of death will do it so severed, that one cannot be but horrified of what is left. Yes, they also call the forces of the dark here, but do not expect it to be a total brutal assault of nonsense noise. No, the band is capable of even playing a mid-paced tempo and using melody to do it in wicked ways and with endless pain. This second full length is an improvement over their already killer debut album, and at just over half hour long to be possessed by their Metal of Death. The riffs are so monstrous, they sound like human flesh being hanged up in hooks while being offered to darker demons swallowed in a black aura of hatred. Even today, when this style has spawned countless bands trying to emulate the elders, it is them, the ones still surviving, that have to be brought back from the realm of the dark to show how it is to be done the evil way. The return of darkness and evilness as they claim in a ‘Wretched Disfigurement’. This one is up there with more actual gems of darkness like the last INTERMENT or the first TORMENTED albums, which by all magick coincidences, are all formed by musicians that were dwelling the earth in the early era of chaos of Death Metal like an ever flowing stream… www.facebook.com/underthechurch, www.pulverised.net

Julián “Silence Of The Shadows” Núñez

Julián “Silence Of The Shadows” Núñez