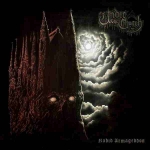 In 2012 two thirds of NIRVANA 2002 started plunging into Death Metal again with a new band called UNDER THE CHURCH. One demo and an EP later the band is now ready for its first rabid, oozing and putrid full length debut “Rabid Armageddon” which is a continuation of what happened on “Demo 2013” and “Under The Church”. With a punkish introduction UNDER THE CHURCH start off with classic Death Metal very much influenced by the music of a certain Mr. Reifert while the lyrics tend to deal with a wider range of horror rather than just blood, guts and gore. While the first two tracks do not show any sign of mercy, ‘Triad Ov The Inquisitors’ brings in some slow and heavy grooves which allow the record to breath for a while after ‘Magus’ increases the level of speed again. With ‘Suspended In Gore’ UNDER THE CHURCH deliver the most AUTOPSY sounding track on this record which starts slow and with trademark horror melodies only to be followed by a fast paced ending. ‘Walpurgis Night’ again adds a bit more tempo to the record but delivers some good dynamics with its mid-tempo verse riff. The three following and final tracks basically continue what already happened on this record and finish off this homage to ancient Death Metal. “Rabid Armageddon” is definitely not a record one has to own but if you just want to kick back and spare your AUTOPSY, ENTOMBED or DEATHSTRIKE records this one will do the trick. Get your info here: www.facebook.com/underthechurch, www.facebook.com/pulverisedrecords