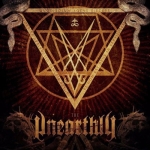 A short look at the cover, song titles, biography, a short listening session and no doubt – another BEHEMOTH clone! May be pure coincidence, but recently there seems to be more imitators of the Polish legend than ever. UNEARTHLY (founded back in 1998) from Brazil started as a veritable Black Metal outfit (the second album was entitled "Black Metal Commando") the band changed during the years and the self-titled fifth album offers more Death than Black Metal. The only Black Metal reminiscences left sound more like CRADLE OF FILTH (e.g. ‘The Dove And The Crow’) with a musical and vocal arc of suspense. The track ‘Agens Mortis’ even surprises with female vocals. The rest is a more mid-tempo based Death Metal, the riffs are played slow and the rhythm is often interrupted. The vocalist tries more to pronounce or chant than to perform deep grunting or high shrieking. Production and sound is satisfying, nothing to criticize. Judging in categories like singularity or uniqueness the band is nothing more than a copycat. For me personally the album was boring every time I listened to it. Because the band never reached the level of bands like BEHEMOTH and CRADLE OF FILTH. The songwriting is just missing the electrifying sparkle, the whole album is stuffy and unadventurous. But if you do not care about such categories you may give this album a chance. www.facebook.com/pages/unearthly/96829882724, www.metalage.sk