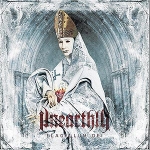 Fourth album from this Brazilian Death / Black Metal machine. I know this band since their debut album in 2002, and the band has evolved from a DARK FUNERAL type of high speed Black Metal to a more Death Metallic touch, similar to BEHEMOTH, which again is like a mixture between early MORBID ANGEL and MARDUK. The production is of high values and the performance and execution is also top notch. Usually this kind of bands end up sounding sterile and mechanical, but in this case, UNEARTHLY has enough abilities to craft well done tunes, very good guitar solos, and actually memorable songs. All those Black Metal bands that I have mentioned are also highly influenced by the one and only MORBID ANGEL and dwelling deeper you can listen that the influence goes further to early VENOM and BATHORY as well as early SLAYER. Maybe, the production could be done rawer to have a more personal sound, but still, on that area of bands with a polished sound, the brutality shown within and the good riffs, makes it for a quite interesting album. The lyrical concept is quite anti-religious. This album was released back in 2011 and it is good that it is kept alive again. For those that miss the sound after “Satanica” or “Thelema.6” this is a very good option. www.theunearthly.com, www.facebook.com/pages/unearthly/96829882724, www.metalage.sk

Julian “Lord of all Battles” Nunez

Julian “Lord of all Battles” Nunez