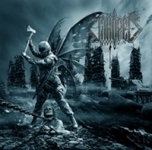 ‘Watch your neck muscles a bit, bro. You are soon about to get a serious brain damage – or in the worst case scenario, about to say a final goodbye to your goddammit head. So, what is this? Now lemme borrow your portable Walkman for a few moments, as I need to know what made you lookin’ like a horny and crazy bull on the grass field, a smell of cows on heat in your widened nostrils’. UNHOPED, this 5-piece, young Thrash Metal act from the Finnish soil, has been around since 2007 – and thus far the band has released one demo, one EP (titled "First Blood") and their latest outing so far is this 8-track record, titled "Die Harder". Without fearing to say a bit, UNHOPED have done some awe-inspiring job at both TCR and Unhola Studios during this ongoing year while recording "Die Harder". The guys clearly have some love towards old school Thrash Metal acts, such names as SLAYER, and KREATOR coming to mind on the top of the pile. UNHOPED’s Thrash is very riff-based, crunchy, frenzied and well executed thoroughly, leaving not much to be hoped for actually. Most of the time the band feels familiar by sailing on relatively fast-paced waters of Thrash, but every now and then they wisely use their break in the tightest turns in order to get a more mid-paced mode on for the songs – just for the sake of variation or whatever. The bottom line, however, is these young Finns’ Thrash flows very nicely and effortlessly indeed – and I bet the guitar duo King / Hanneman would kill for hearing some of the riffs that this Finnish twin 6-string attack squad Paasu / Laanto have churned around on this surprisingly ass-kicking release. Just for being UNHOPED’s debut full-length studio album only (well, its playing time is less than a half hour), this album alone promises a bright future for them. They can undoubtedly thrash – and so convincingly even. "Die Harder" truly fuckin’ smokes – big time! www.unhopedband.com