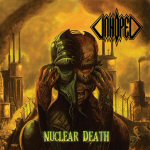 After at least a somewhat impressive debut album titled "Die Harder", which they self-released back in 2011, the Finnish Thrashers UNHOPED hit us hard again, with their new 5-track EP called "Nuclear Death". Well, maybe putting this band just under the Thrash Metal category, doesn’t do justice for describing the band’s violent sound well enough. A small slice of Death Metal (into the vein of MALEVOLENT CREATION’s "Ten Commandments") is also a part of their sound on this EP, adding more sheer heaviness and hostility into the band’s furiously headbanging and extravagant Thrash outbursts. As it already was the case with the "Die Harder" album, SLAYER’s strong influence pushes shamelessly through their material on the "Nuclear Death" EP; the riffs and wicked spot-on solos are the clearest signals about SLAYER’s presence within their songs. Vocalist Jyrki Luostarinen doesn’t save himself much vocally either, having this a bit of snarly, beast-like Thrash voice that at times reminds me of Maurice Swinkels of LEGION OF THE DAMNED, fitting perfectly into UNHOPED’s aggressive and brutal nature of the songs in my opinion. Now it’s been proved by the "Nuclear Death" EP at least that we can expect to hear much more from UNHOPED in the future. This combo simply kicks ass if you want to get your Thrash calories in a hurting and damaging form. UNHOPED: www.facebook.com/unhoped, label: www.violentjourneyrecords.com