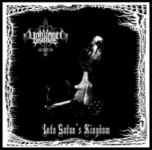 Fourth full length album, from this one man project from the USA, which includes in his story of bands being a member of THORNSPAWN. Yes, fourth, and I even think they released two albums the last year… being this one of those. The music of UNHUMAN DISEASE ravages within the realms of fierce Black Metal, which owes their sound to the more primitive and raw exponents of the genre. I would say that Norwegian Black Metal and Swedish Black Metal are a big part in their sound, as once in a while riffs can sound to DARKTHRONE or early DARK FUNERAL alike. The production is also quite raw, almost demo level quality, yet it can be sorted out what the guitars are doing, although a bit more of power in that area would have helped a lot. The grim, rehearsal like sound of the drums also adds a very special touch to the sound. The tempo the band uses ranges from mid-speed to very fast burst of attack… whereas they rather do it a lot better in the lower speed formats, as it does sound more atmospheric and grim, rather than the fast parts that due to the nature of the recording at times sounds like a blur of noise, chaos and destruction. Lyric wise this is pure Black Metal as song titles like ‘Demonic Unholy Night’ or ‘Guided By Satan’ can give you a reference. At times, just at certain times, I can hear a small spell of suicidal Black Metal touches. Formed in 2001, it is obvious that they have one way or another reached a competent level in musicianship, and this can be a quite enjoyable experience for those looking for quality in minimalistic Black Metal approaches. If the band used a stronger guitar sound, yet retaining the grim and funereal aura contained, this would even be more interesting, and of course, heavier album. There is a plenty use of subtle morbid melodies contained, and of course the use of diabolic themes makes a return to form for what real Black Metal is. Give it a listen if you are following the cryptic, desolate realms of raw Black Metal with quality. www.myspace.com/unhumandisease, www.blackhate.de