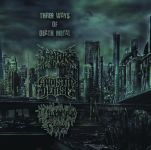 “Three Ways Of Death Metal” is a three way split presented by Wroth Emitter Productions. We kick off with IMPUR, a Spanish Death Metal band, that has been around since 2019. They occupy the first position in the split contributing 3 songs. IMPUR play standard Death Metal with no frills and no games. These 3 tracks are taken from their 2021 EP titled “Slaves Of Decay”. Everything is pretty much your standard stuff, I have no complaints. The production is on point and of course why wouldn’t it be? The band seems to have taken extra care in this aspect. It was produced by IMPUR themselves and Miguel A. Riutort who’s done live sound for MORBID ANGEL and ABBATH amongst others. The rhythm section is the strong point of IMPUR, a simple and in your face attack. The solos are well crafted and the vocals clearly suit the environment that the band creates. This is a simple approach to old school Death Metal, which the band effortlessly pulls off. On the whole, this is a good beginning to the split. Hopefully IMPUR will have a full length coming pretty soon. I’ll definitely keep an eye out for it. Next up is SADISTIC DEMISE, a Russian chainsaw wielding Death Metal band with a traditional Russian approach. SADISTIC DEMISE has been around since 2020, but all the band members seem to have played together in one project or another. The guitars are your regular downtuned buzz, caressing their entire output. The vocals are deep and fit very well, the riffs are standard and do the job. Their self titled track stands out with a kickass solo! On the whole, the band works well. This must be a fun band live. Nothing brand new or out of the ordinary here, this is standard Russian Death Metal, tight, structured and delivered without a deviation. The last band on this split is UNIDENTIFIED CORPSE. Also hailing from Russia, this band plays relatively modern brutal Death Metal. Whilst I don’t necessarily agree with the drum sound, particularly that of the snare, the band manages to make it work. All tracks on this split are from their 2013 EP “Domination Of Dying People”. On the whole it is relentless and in spirit with your expectations from a brutal Death Metal band. My only contention is the drum sound, otherwise the vocals are your standard squeals, the guitars aren’t lightning quick, they’re rather well structured. It’s good to listen to a band that takes it slow, currently most of the stuff in this genre usually focuses on technicality and it gets tedious. Anyway, on the whole this split is a good showcase. For more band information please visit https://vk.com/unidentified_corpse, https://vk.com/sadisticdemise or www.facebook.com/impurband, label contact: www.facebook.com/wrothemitter