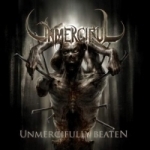 OK this one is a fucken no brainer. Do you like your Death Metal insanely fast, heavy and brutal? Then check this badboy out. Do you like raw production with old school personality? Then move on… this one’s not for you. Unmerciful is one of the latest signings to the already stacked Unique Leader roster. This band consists of former members of the band Origin and also a former live guitarist (Jeremy Turner) of Cannibal Corpse (who was also in Origin). With this pedigree you know that the shit is going to be brutal, fast and above all, well played. The similarities to Origin are there although this is more accessible. I am not saying that this is by any means less brutal, it’s just that this one is actually catchy without sacrificing brutality where as Origin completely throws any semblance of catchiness out the window in favor of the "how the fuck are these guys playing this shit" approach. There is definitely technicality on display here but these guys seemed to put songwriting ahead of musicianship in terms of importance. And in my humble opinion they have a better album because of it. The vocals (which are shared by different members of the band) are actually somewhat intelligible which also adds to the accessibility I was talking about. One of the things that stands out on this album are the drums. This shouldn’t be surprising as they were done by none other than James King who also played the skins on Origin’s "Echos Of Decimation". This guy can play (he better fucking be able to… he replaced John fucking Longstreth… the only guy who would be harder to follow was probably Roddy when he left Hate Eternal) the drums are tight and very, very fast with some nice variation within the songs. Which brings us to the production. Unique Leader must have some strict standards when it comes to the production on their albums because they are always of high quality… this one is no exception. If you got a good set of speakers or some nice cans then turn this one up. The bass is pretty low in the mix but this is par for the course (unfortunately) in extreme Metal. Basically if brutal Death Metal is you thing then this album should not disappoint. Well done. By the way, this CD also contains some live songs and it is interesting to hear how well these guys pull this shit off live. Very impressive stuff. You can find information about this band and buy their CD here: www.uniqueleader.com.