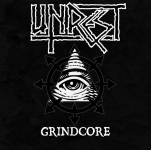 One advantage of getting older is the increasing ability to recognize or associate connections and contexts. The debut by this US-based trio not only aroused my attention by reason of the title but also the band’s name ringed a few warning bells. Some 20 years ago a band called DISRUPT released the one and only full-length the group ever did and sadly they split-up the same year (1994). DISRUPT is considered one of the first bands ever (not only in their home country USA) to mix Grindcore with Crustcore and what later was traded under the catch phrases D-Beat or Powerviolence. And this album was entitled – "Unrest". Although this maybe pure coincidence, "Grindcore" immediately made its way to my shopping cart. And I was not disappointed. Ultra high-energy Grindcore awaits the listener, the short playing time does not carry weight at all. After two or three run-throughs I was usually so exhausted that I needed some easy listening like CANNIBAL CORPSE. Joking aside. UNREST are doing the same like NASUM (Dammit! Almost eleven years have passed since the death of Mieszko A. Talarczyk) or KEITZER. Taking the traditional Grindcore one step further by adding not just the above mentioned Crust- / Hardcore elements but also some decent Death / Thrash Metal riffs, traces of Sludge and diversified vocals are added and there you have it. The perfect Grindcore album 2015. For all additional information check out: www.facebook.com/unrestgrind, www.facebook.com/unspeakableaxerecords