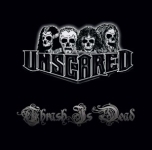 If you would like to know where the new WITCHBURNER vocalist Pino used to be in for the last six years then you have now the opportunity to close this gap of knowledge. First off all: don’t get fooled by the album title ’cause UNSCARED plays uncompromising old school Thrash Metal – but of course I have never expected anything else than that. The debut by this Heppenheim / Hessen based squad includes 12 tracks (incl. an instrumental and an ETHEL THE FROG cover called ‘Fight Back’) of pure underground headbanging madness. I really like their lyrics in ‘Thrash Is Dead’ or ‘Digital Headbanger’. They really bring it straight to the point what many die hard Metalheads think. Wannabees try to be the hardest maniacs around without any background and feeling for the music and all just for fashion or to show their friends how cool they are. I personally despise downloads in any form as well. If you want the music then get the ‘real’ stuff and not that digital junk. Musicwise the band comes up with quite well executed tunes which have the neccessary drive and aggression to get every mosh pit crazy within a few seconds. UNSCARED have a good ballance within their tracks to keep the whole thing varied with straight forward, skull splitting riffing. There is a bunch of energetic, violent and (shorter) Thrashers while on the other side you get a few longer, more detailed songs with some nice guitar leads and cool breaks / varity in the guitar department. As far as the speed is concerned it pends between the usual / standard fast and midtempo. With ‘Rise And Fall’ there is even a calmer, slower track at the end of the album. The production has a raw edge and isn’t too polished. But nevertheless it’s powerful and there’s no space for a garage sound recorded somewhere in the janitor’s lumber-room. In my humble opinion, "Thrash Is Dead" is an entertaining album packed with honest metallic music, even though the Hessians don’t offer something groundbreaking. So in case you like to feed your CD player every day with some delicious and meaty Thrash Metal discs then you should not hesitate to let it taste this little piece of underground. Bon appetite! For more info and orders please get in touch with the band at www.unscared.de