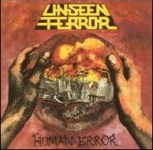 There was a time when playing real fast had a real Metallic meaning, there was a time when playing real fast and coming up with catchy intense / powerful riffs had a real Metallic meaning, you don’t believe me since playing real fast for you means nothing but to endure the likes of CANNIBAL CORPSE, DARK THRONE and the likes?! Well you’re wrong, that time period existed in the mid 80s with great Death / Thrash bands such as INSANITY, CRYPTIC SLAUGHTER, ARCHENEMY (no, not the poor Swedish outfit), DEATH (circa late ’85), GENOCIDE / REPULSION and U.K.’s UNSEEN TERROR which was formed from the ashes of the promising demo band WARHAMMER! Shane Embury (now with NAPALM DEATH) and Mitch Dickinson (later seen with HERESY, as soundman for U.K. bands and now works at the Earache office) had the desire to create something as intense and fast as the U.S. outfits around at that time that I’ve mentioned before and the result came out in the shape of that album, one of the first albums Earache released and despite some big flaws, the result to this day is still awesone. What you have here is a perfect mix between CRYPTIC SLAUGHTER for the speed and MASTER (circa first LP or ’85 if you prefer) for the heaviness, it’s that intense! Of course many will say that Mitch’s vocals sound immature and certainly unusual but I still think they fitted the music rather well – the best would have been to have Mick Harris (NAPALM DEATH drummer) doing them like he did a few months later for the UNSEEN TERROR Peel session. Also the drum sound sounds a bit too mechanical but I personally pay more attention to the music as a whole than to minor details like that and fuck, the opener ‘Unseen Terror’, ‘Oblivion Descends’, ‘Burned Beyond Recognition’, ‘Deliverance’ etc etc just kill all the way! You want to hear raging Death / Thrash? Get that right now! The only things I could live without are the few crossover tunes and some uninspired leads, but those are short and not that boring. As bonus for this re-release they’ve included four rehearsal tracks but I don’t find them as powerful as the earlier material for some reasons. An excellent release all the way delivered by two guys who knew what quality material meant. What about releasing the legendary AZAGTHOTH demo now, huh?