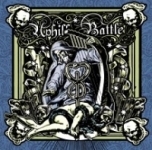 Though I’ve written countless reviews for Voices meanwhile and know a million of different styles and sub-genres UPHILL BATTLE give me a hard time trying to put them in the right category. The US-based quartet musically draws influence from various genres: Grind, Thrash, Death Metal, Sludge and Hardcore / Screamo. Vocal-wise hectic, slightly hysterical screaming is utilized mostly unfortunately resulting in a good dose of monotony in the vocal department whereas the music stuns with its high level of diversity, its dynamic feel and broad stylistic range. "Blurred 1999-2004" is a sort of rarities, unreleased material collection containing three tracks recorded in 2003 which appeared on the Japanese version of UPHILL BATTLE’s "Wreck Of Nerves" album, the previously unreleased song ‘Threshold’, three songs taken from the split CD with ANUBIS RISING, the song ‘Faded Red’ off the "Trash Comp" sampler, the song off the 2000 released split 7" with QUEST FOR QUINTANA ROO and last but not least the band’s 1999 released first demo. The sound quality of all these releases is excellent, raw at times but still it fits the mood of the band, its unbridled energy and high amount of aggressiveness. As you might have realised already, UPHILL BATTLE is definitely not my cup of tea but even I could like a song like ‘Means To An End’ and with better vocals I might have even loved the entire record, but this endless screaming sucks. However, if you call yourself a UPHILL BATTLE fan, this is a worthy, visually tastefully designed and informative collection! www.relapse.com.