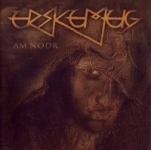 URSKUMUG are hailing from Letvia, released a CD-R called “Pareja” and some song-features on compilations prior to this album. “Am Nodr” offers basic, at times technical, Black / Death Metal music with tribal rhythms and percussion woven into the soundscape. This is also where the lyrical concept of URSKUMUG is heading to: baltic, pagan / “pre”-pagan themes and myths. The whole album is done with fine and skilled musicianship and is produced clearly and “fat”. A good but not really ground-breaking output. To be really outstanding it features too much standard Black / Death Metal instead of the tribal influenced stuff which really sounded interesting. Nevertheless we could hear even more of URSKUMUG in the future. www.ledotakas.net, www.urskumug.lv