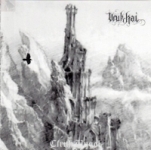 I don’t know what’s worse, the overplayed Tolkien theme or the fact that ambient electronic albums induce yawning fits. That these two tiresome elements wed together on URUK-HAI’s “Cirith Ungol” means boredom in the extreme. URUK-HAI is, as far as I can tell, a one-man band not unlike DROWNING THE LIGHT and other “bedroom” bands as they are sometimes referred to. Each year URUK-HAI releases multiple demos, EPs and albums, which in my view seems suspect. While it’s certainly possible that each release might be good, the sheer number of them points to a quantity over quality work ethic. Indeed, “Cirith Ungol” has about as much artistic vision as a child’s chalk drawing on a block of pavement. The entire 78 minute song sounds like a cast out Skyrim soundtrack, mean to evoke lofty visions of knights on horseback and crenellated battlements wreathed in the mist of Middle Earth. All of which even the most casual Metal fan has heard in one form or another. Added to the absurdly long keyboards, harps, and whatnot, the vocals, which are about the only vaguely Metal thing about this album, couldn’t be more average. It’s as if this band’s entire modus operandi is to copy SUMMONING almost note for note, and make a bad copy at that. I can’t think of a single redemptive quality to this album. However, if you’re feeling generous, give this a listen at your own peril – after all, you might fall asleep, fall off your chair, and hit your head. www.myspace.com/urukhaiofficial