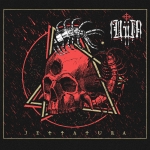 VƆID stands for ‘VOID’, and is a Black Metal band formed in Nantes (France) in 2012. After the formation they independently released their debut demo “Hate & Roll” and a split named “Clash For The Crown”. From the early releases, their sound and playing style resonates a fierce combination of Black Metal and wicked Rock’n’Roll, where frozen tremolos surge with menacing and filthy riffing. After six years of being in the void they came out of the dark and released their maiden full length “Jettatura” in association with prestigious Les Acteurs De L’Ombre Productions, known for sighting many unheard of, but absorbing atmospheric and avantgarde Black Metal acts. VƆID is another fine example and their debut full length proves that highly. While their style can be described as Black’n’Roll, for the sake of genre differentiation, we can immediately think of WATAIN, SATYRICON or MIDNIGHT, SPEEDWOLF or DARKTHRONE but after a few listens, when your ears will be soaked and poisoned by their entrapping sound, you will come to the point that this is certainly more than a typical combination of Black Metal and Rock’n’Roll but a spirited and possessive transition of the legacy and sound of Metal. It’s the punch, rawness, raspy screams, dark atmosphere and forlorn spirit combined with the uncompromising attitude and inner revulsion. In all togetherness of the early spirits, VƆID has their unique sound which has the innovation and structures to draw and hold your attention like an enticement. This record consists of six tracks which were recorded at Brown Bear Studios and mastered at MasterLab Systems. The songs are dealing with awakening the hidden spirit from the ever present void. Somehow, even operating a mid-paced marching speed, there’s intensity behind everything on “Jettatura”, as though the songs are being pushed faster than intended, but never throw too much, thus adding a contrasting sense of peril and ordeal inside. Every track has its personal expression but ‘We Come We Breed We Live’ might carry everything this record means. The frosty guitar tone, stabbing arpeggios with rockin’ drum beats will feel like repetitive hypnosis. In ‘Red Cardinals’ some blast beats appeared but they run slower than you’d expect, nearly changing into a different type of beat which is nothing but fascinating. “Jettatura” means evil eye, which is aptly chosen by VƆID, as the occult atmosphere, dark Rock passages, ripped voice and roaring blast will greet every exposed listener with an evil eye. The album artwork, done by Came Roy de Rat (PENSEES NOCTURNES, ARKHON INFAUSTUS, HEIR, BELTANE, LADLO Fest), who is also the singer of VƆID, perfectly embodied the essence this record beholds. Considering the artistic style of Black Metal, this record is a welcome addition to the pantheon of the Metal world which will certainly lure the souls of the exposed. Explore more about the band at: www.facebook.com/wehailthevoid or visit their label page: www.lesacteursdelombre.net