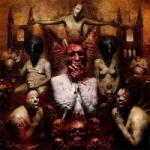 A rather unique phenomena in the underground is to have a band with such impeccable set of killer releases one after the other. Still, VADER became stagnant on "The Beast" album two years ago and anybody could have heralded their imminent demise after such bad move. Surprisingly enough they returned late 2005 with a taster EP of what would be like VADER 2006. The "Art Of War" EP left us wounded and definitely wanting for more. Now they strike back with "Impressions In Blood", the album their faithful fans like me have been waiting for since "Revelations". VADER has managed to grace our ears with a cleverly produced piece of Death Metal art for which I cannot complain anything about. Extremely talended musicanship, godlike execution and incendiary aggression are the strongest selling points of these Polish legends that can be easily considered the best in its genre. It is just fascinating for me to wonder where these guys take their riffs from… it seems like an endless fountain arises in their backyard or something because song after song virtually turns into a riff fest delight of unimaginable proportions. Horns up for the almighty VADER… the undisputable kings of the European Death Metal… often imitated never equalled! I better replay the album a good 10 times more instead of typing how great this actually is… Run and buy it if there is still a small dose of good musical taste in you. Visit their site at: www.vader.pl.