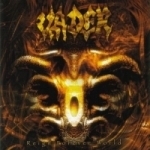 VADER have been a strong force in the Death Metal underground ever since the band’s origin. But for one reason or another I always preferred their liveshows over their studio albums and therefore started to lose interest in their releases at one point. There simply was too much stuff coming out in a short period of time, plus I didn’t really like their evolution in the vocal department too much, which was drifting apart from brutal Death Metal a little too much here and there. Anyway, “Reign Forever World” is not a real new full length, but a compilation of cover tracks by DESTRUCTION (‘Total Desaster’ – played a little too fast for my taste), JUDAS PRIEST (a cool version of ‘Rapid Fire’) and MAYHEM (quite okay sounding…), two live songs (that got recorded at the Thrash ‘Em All festival in August 2000), two bonus tracks from the Japanese edition of “Litany” and three brand new tunes. So, all in all for VADER fans this is an essential and valuable purchase as it’s being sold for a rather cheap price as far as I can recall. Everyone else should better pick up a regular release of these Polish warriors.