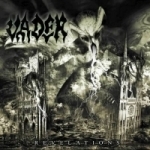 Nothing has really changed when it comes to VADER, apart from the fact that bassplayer Shambo got replaced by a guy named Simon on the band’s newest, by now already 12th offering (also considering all live and compilation releases). Musically they still stick to their thrashin’ form of Death Metal somewhere between old SLAYER and MORBID ANGEL and deliver the wellknown quality – great cover art, clean yet powerful production, good musicianship and always very intense. I still can’t stand the growling vocals… and in order not to break with another old tradition, the album’s playing time ended up around the 30 minutes mark once again. VADER is one of the longest running extreme Metal bands (their origin goes back to 1986 by now!) and therefore probably the most professional one, but I still wouldn’t necessarily consider them Poland’s finest just because of all that. Throughout the years many new bands appeared on the scene (and I’m only referring to country mates of VADER here!) that all sound a lot more hungry, brutal and intense than VADER ever did. They are all skilled musicians, deliver top notch productions as well – and in comparison, I always liked their material alot more than what VADER constantly release on record. Of course tastes are different and the fact that VADER is still very successful might prove me wrong, but it won’t change my opinion nevertheless. Good stuff for die hard VADER fans, but certainly not exciting enough to win over a new generation of Death Metal fans.