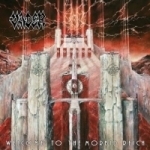 Despite being plagued by countless line-up changes over the last couple of years, Polish Death Metal veterans VADER have never suffered in terms of quality throughout their over 25 years long career. As a long-time fan of the band I was of course quite curious regarding "Welcome To The Morbid Reich" (especially since the title and the cover have the potential of being a classic) and rest assured, people, it’s 110% VADER from start to finish yet the album has a minor flaw that actually bothers me a lot, but let’s start with the basics: VADER means powerful riffs and you’ll get that a plenty yet this time around with less SLAYER-isms but more of a pounding Heavy Metal feel plus some captivating melodic leads (the best the band ever had!). VADER is also synonymous with speed and of course you’ll get your share of blasting, straight to the point drumming that despite a contemporary production is far from sounding too sterile and comes along with a good punch. With songs like the mid-tempo monsters ‘I Am Who Feasts Upon Your Soul’ or my personal favourite ‘Come And See My Sacrifice’ you’ll also get some pleasant rhythmical diversity since the days of VADER going high speed nonstop are long gone. Now, let’s get to my major point of criticism here: the vocals! I absolutely love Peter Wiwczarek’s trademark growl since it’s one of these few remaining, immediately recognizable, characteristic voices in Death Metal. Unfortunately, the band has now brought in some snarling, Black Metal kinda screams that of course are meant to increase dynamics, but VADER are one of the last bands on this planet in need of that. They sound somewhat childish and out of place as do melodic leads in SLAYER. Call me a nitpicker but this aspect gave me personally a hard time to find an access to this record despite its flawless songwriting and kick-ass production. It’s a good album, way stronger than 2009’s "Necropolis" yet not as good as "Impressions…", I just hope it proves to be a grower in the end, I’ll be trying hard. Overall, the current line-up is definitely strong and I sincerely hope they’ll keep VADER going for another 25+ years but without snarls…please! PS: The limited edition includes two bonus tracks, cover versions of ‘Troops Of Tomorrow’ (THE EXPLOITED) and ‘Raping The Earth’ (ENT). www.vader.pl, www.nuclearblast.de