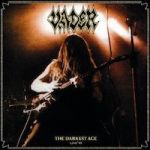 The Polish label Witching Hour Productions has done a fantastic job reissuing the first live album of their fellow countrymen VADER. Every Metalhead worthy of this name should know this iconic Death Metal band from Poland, active since 1983. “The Darkest Age – Live 1993” was originally released in 1994 by Baron Records, then it was repressed in 1996 by Arctic Serenades, in 1998 by Metal Mind Productions and System Shock, in 1999 by Pavement Music and in March 2020 by Avalon. But here we have the best reissue so far: remastered and released in May 2020 on CD, tape, digital and vinyl format. This session, recorded at the Corona Hall in Cracow, has achieved over the years a cult status, because it’s the first live evidence of the band led by Piotr Paweł Wiwczarek. Another interesting fact – especially for collectors – is that the first edition was wrongly mastered and the whole concert appears as a single track on the Baron version. “The Darkest Age – Live 1993” contains eight songs from the debut album “The Ultimate Incantation”, one from the “Morbid Reich” demo (‘Reign Carrion’), three ambient intros and a killer ‘Hell Awaits’ cover. A total of 13 tracks for almost 51 minutes of uncompromising, fast and brutal old school Death Metal. Basically this is some of VADER’s best material to date: solid Death Metal to the bone! I had the chance to see them live in 1996 with MALEVOLENT CREATION, VITAL REMAINS and INFERNAL MAJESTY, so I can assure you that VADER is one of the best live bands I’ve ever seen and this line-up was just incredible with the late Doc behind the drum kit. Musically we have a prime example of fast, technical and brutal Death Metal with some aggressive Thrash Metal influences; just imagine a mixture of MORBID ANGEL, DEICIDE and SLAYER from “Reign In Blood”. A superb guitar riffing with tons of energetic, morbid and catchy melodies blends naturally into Doc’s technical, dynamic and intricated drumming style (ultra fast double bass, blast beats, crazy rollings, cymbal accents… you get everything here). Regarding the production quality, it’s very powerful: every instrument is perfectly audible and you can hear the crowd noise too. In conclusion, this live album offers to the listener a killer live performance from a killer band. If you’re into destructive Death Metal from the ’90s, you can’t go wrong with VADER. Buy this new version of “The Darkest Age – Live ’93” and pay the right tribute to one of the longest-running European Death Metal bands and to one of the best extreme Metal drummers from the 1990s and 2000s who sadly died too young. More band info at: www.facebook.com/vader, label contact: www.facebook.com/witchinghourpl