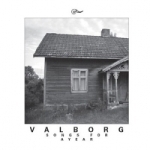 This review comes a bit late as it was unfortunately buried somewhere on my hard drive but good music is never dated – furthermore, VALBORG have just released their first full-length “Glorification Of Pain” this April so the circle is sealed… here we go: having already reviewed material of the splendid ISLAND ( I suggest you read the reviews which can be found here as well), I am happy to present another band comprising some of the same musicians, namely VALBORG. Whereas ISLAND recently became quite a moody and calm affair, VALBORG seems to capitalize more on aggressive aspects. “Songs For A Year” seems to be some kind of a concept album, mirroring the time between August 2002 and 2003. The songs are in the chronological order in which they have been written, taking the listener on a journey with VALBORG, so to say. Musically, this band is a bit hard to label as it is in a grey zone between progressive music, Death Metal, Black Metal and more… the band draws influences from acts as different like more recent ENSLAVED, NEUROSIS, ULVER and maybe IN THE WOODS and VED BUENS ENDE as well as GORGUTS (some of the disharmonic brutal riffing). Instead of resulting in a mediocre or embarrassing mixture without direction, this leads to a captivating, dramatic, raw and brutal but also deep and even emotional album – I have no idea if it was intended that way, but the clear layout (showing an old cottage) and clichée-free band picture taken in the woods combined with the music with all its facets gives this album a somewhat heathen or pagan feeling without clichée (in contrast to most of the ridiculous humpa bands decorated with runes and whatnot). Besides the dissonant brutality and psychotic to deep vocal delivery there are also calmer, almost epic moments with clear vocals. One detail sound fetishists might have a problem with is the fact that for just three songs a proper studio has been utilized, whereas the remaining ten songs have been recorded in a rehearsal room – still, the production is far from being raw or noisy. “Songs For A Year” is still available at www.zeitgeistermusic.com for a mere 7 Euros.