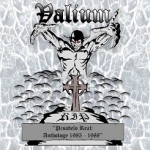 This is a compilation of all the material made by VALIUM, a band from Portugal, active from 1985 to 1988. During the three years of their existence, the band made some rough sounding, but cool Heavy Metal. Later on, they would abandon the name VALIUM and become CASABLANCA who I assume are much more well known since they did a few albums under that name. But back to the VALIUM stuff. Though the sound is raw and the songs written by a band that was obviously less skilled and organized than they would be later as CASABLANCA, there’s a charm to these early songs which is why they’ve been collected in this anthology. As the album progresses the songs get better, and they also grow a little darker with some really cool undertones. A song like ‘Quem’ should make it clear why this batch of old songs was picked for re-release as well as others like ‘Belo E Feio’ and ‘A Demanda’, which I consider to be the best on the album. Not much else to say except that this is a really cool compilation, and a great snapshot in time of a band in its early period. When you listen to this you are listening to a group of people mature as songwriters and it’s fucking cool to experience. Check this out! www.metalsoldiersrecords.com, www.bloodandironrecords.com, www.nonnobisprod.com