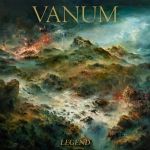 The first work of this enigmatic band from the USA is their debut album from 2015. Now this one is actually their third opus, and the band is composed of people that already have some mileage in other bands like PREDATORY LIGHTS (fantastic band, for those into the MORTUARY DRAPE style) and ASH BORER to name a few. Their past album had a very good cover art, not far away from the one on this album, which is also great, simple but effective. I have it somewhere in my collection and remember it being a solid effort of melodic Black Metal with some Death Metal touches and a nod to the early Greek sound. Well, this new album is still in the same vein, but with an improved sound and execution, and with more Heavy Metal and some melodic Death Metal touches here and there, all in the shroud of their melodic and sometimes quasi-symphonic type of Black Metal. The strength of the band lies definitely in the more mid-tempo riffs, where they create a very atmospheric type of sound not far away from early ROTTING CHRIST or VARATHRON, but with their very personal touch. The more Heavy Metal aspects of this release add really a lot to the atmosphere of the band, as those riffs are memorable and blend perfect with the more extreme sounds the band uses as a core sign (of evil existence). The vocals are also more Death / Black which fits the music quite well. Five long songs, filled with riffs after riffs and it never lets the listener down. Their creativity is amazing as there are some parts not far away from the best MY DYING BRIDE had to offer in their darkest hours. A mention must be done to the incredible musicianship and great production which sounds alive and organic. After a few listenings I am now not sure if parts of New York are not in Athens… the spirits move in mysterious ways. A fantastic release that Metalheads are advised to get at the speed of death. Epic extreme Metal where the band is capable of infusing many styles to create their very own. That is what is called a legend! www.facebook.com/realmofsacrifice, www.facebook.com/eisenwaldofficial